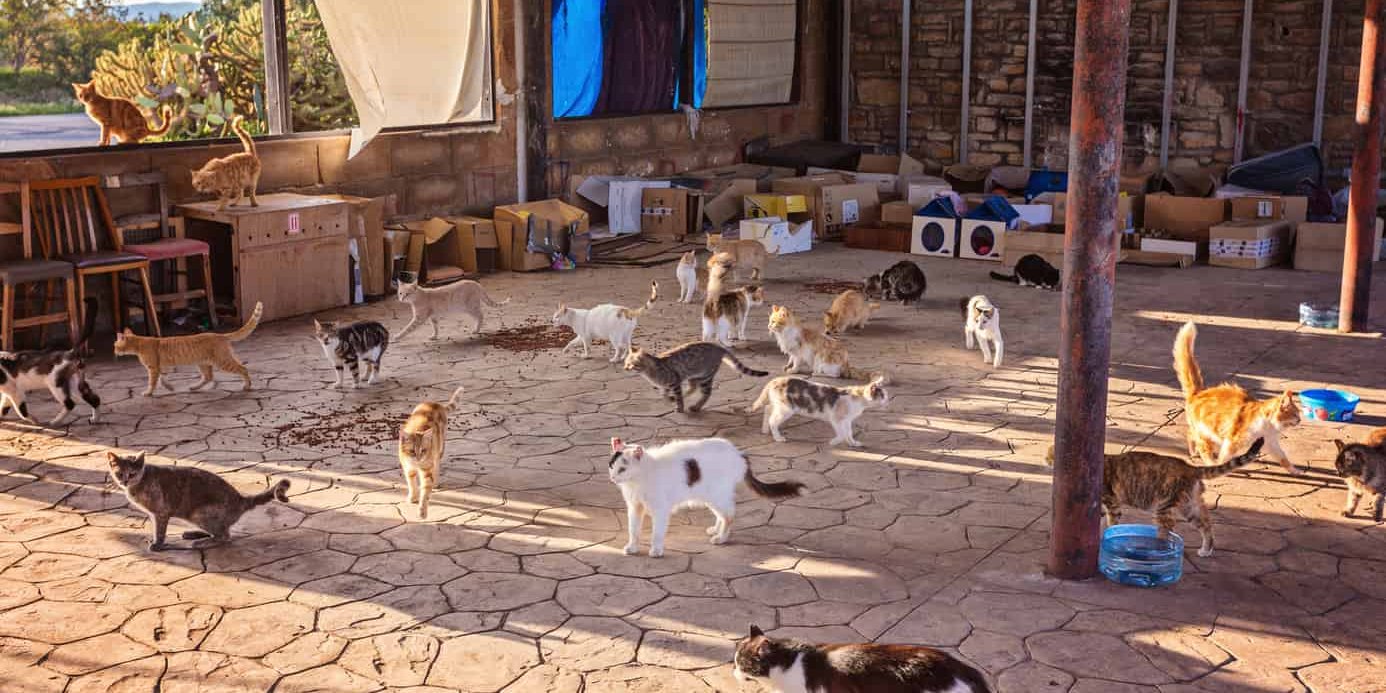 Numerous Animals at a Residence

The most significant warning sign that animal hoarding is occurring is the fact that there are numerous animals at or in a residence. If asked, the person thought to be hoarding pets will be unable to provide an answer to the question of how many animals are at the premises. If a person is not able to provide a solid answer to how many pets he or she has in his or her possession, that person certainly is likely to be a hoarder.

Another of the warning signs associated with pet hoarding is an obvious deterioration of the residence. In fact, residential deterioration is obvious in the latter stages of both pet and more generalized hoarding.

The residence deteriorates for two primary reasons. First, the sheer number of pets naturally take a significant toll on the physical structure of a home and surrounding property. Second, a pet hoarder doesn’t undertake the cleaning or uptake of a residence. Oftentimes, this failure occurs because the pet hoarder is totally overwhelmed by the state of affairs at the property and in his or her life.

As noted a moment ago, a pet hoarder is overwhelmed in the vast majority of cases. He or she does not have the initiative, or even the ability, to tend to tasks like cleaning up after animals. The significant number of animals in a hoarders possession results in the presence of an ever-increasing amount of animal feces, urine, and vomit.

Animals Are Not Well Socialized

A common sign of pet hoarding is poorly socialized animals. Cats are the number one type of animal hoarded in the United States. Dogs are in second place.

Animals Are Not Well Nourished

Even if a hoarder has the best of intentions regarding the welfare of animals in his or her possession (and not all do), another sign of pet hoarding is malnourishment. Animals being hoarded will not be appropriately fed. Indeed, there exist a considerable number of reported hoarding situations in which cats and even dogs are expected to fend for themselves when it comes to obtaining their nourishment. (As an aside, cats are somewhat more adept at finding their own food than are dogs. However, because of the high concentration of cats in a particular space occupied by a hoarder, even if the cats are permitted to roam to some degree, there will not be enough potential food in that area to appropriately meet their needs.)

If an animal in a hoarded group ends up with some sort of contagious disease, odds are significantly high that a vast majority of animals being hoarded will end up infected.

What is a startling reality in the life of an animal hoarder is that when an animal dies in a residence, the remains are often times left to decompose within the residence. Thus, in little time, the space can become highly contaminated with serious biohazardous waste, even beyond animal excrement.

Despite the actual condition of animals, a hoarder will adamantly maintain that they are in good condition, even excellent health. An animal hoarder may in fact actually believe that only he or she can care for the animals properly.

Fleas and Other Vermin Present at or in Residence

In addition to the residence being overrun by animals, the premises will also be infested with fleas and other vermin. Keep in mind that fleas and other intruders like rodents can spread disease. When an animal hoarder reaches a juncture where fleas and vermin infest the premises, the health risk to the hoarder and other rises significantly.

Suspected Hoarder Does Not Permit Admission Into Residence

A common sign that a person hoards animals is found in that individual’s refusal to permit others into his or her residence. The hoarder will make a myriad of seemingly reasonable excuses, all of which fall short of the reality of what is really going on at the property.

Suspected Hoarder Does Not Often Socialize

Finally, an animal hoarder is more than likely to withdraw from others as the situation becomes more overwhelming at the residence. Not all hoarders start off isolating themselves. However, as the number of animals increases, the associated problems mount, a hoarder becomes truly overwhelmed and lacks the emotional ability to interact or socialize with others.