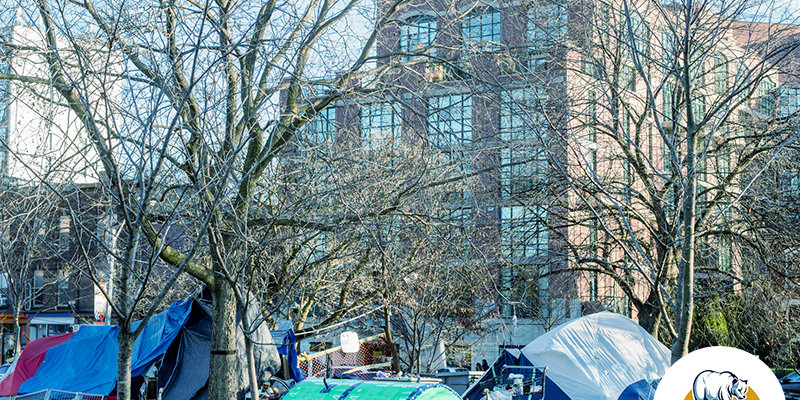 In the past few years, a growing number of residential neighborhoods have faced the establishment of homeless encampments in their environs. Because this is something of a newer phenomenon, there is little definitive research on the precise impact homeless encampments have on property values in residential neighborhoods in which these camps exist.

As of this moment in time, the National Association of Realtors has not undertaken a comprehensive study on the impact homeless encampments have on property values in a residential neighborhood. With that noted, a fair extrapolation can statistically and realistic be made when using a homeless shelter in a residential neighborhood as a starting point for calculating the impact of a homeless encampment.

In addition to these factors homeless encampments share with homeless shelters, camps have other negative features that outpace those associated with shelters:

Anecdotally and statistically, it is correct to conclude that the presence of a more harmful entity in a residential neighborhood in the form of a homeless encampment will cause an even greater drag on residential property values.

Curb Appeal Extends Beyond Immediate Residence To Entire Block and Beyond

A great deal of attention is paid to curb appeal when it comes to the marketability of a residence. Million Acres, a service of Motley Fool, defines curb appear as:

At its core, the term “curb appeal” refers to the way your home looks when it’s viewed from the street. It’s a combination of all the eye-catching design elements that are used to make your home’s exterior look its best. Homeowners often do their best to add curb appeal because they want their home to be aesthetically pleasing when they pull into their driveway at the end of a long day. However, it becomes even more important when thinking of putting the property on the market.

Spectrum, a support organization for homeowners’ associations across the United States, emphasizes that curb appeal is not limited to the state of an individual residential property. The concept of curb appeal extends to a block or neighborhood in its entirety. Spectrum asserts:

Neighborhoods with plenty of curb appeal tend to maintain property values better. Surprised? No, we didn’t think you would be. While it is obvious that well-kept homes, yards, and common areas help neighborhoods stay desirable, it’s hard work keeping neighborhoods in like-new condition!

While not trying to sound overly superficial, the stark reality is that any type of eyesore on a block or in a neighborhood impacts the curb appear of those individual residences in the area. The word eyesore has become something of a technical term when it comes to the impact of something unsightly and its impact on surrounding property, including homes. A common place definition of eyesore is something that is largely “considered unpleasant or ugly.” From a technical standpoint, the usage of eyesore is considered as “an alternative perspective” to a landmark.

Common examples of eyesores impacting the curb appear and associated property values of homes include:

A number of these common examples of eyesores are generally connected to homeless encampments, including litter, dilapidated structures, polluted areas, mud, and feces. Added to the list usually is used hypodermic needles used from illicit drug consumption.

We’ve already discussed the impact a homeless encampment can have on residential property values. The market value of a residence can experience a significant drag if a homeless encampment is in the neighborhood. That alone may be a reason to hold off putting a home on the market, if at all possible.

Property Values After a Homeless Encampment Is Eliminated in a Neighborhood

Depending on ordinances and related factors in a particular community, a homeless encampment may prove relative transient. With that said, even in a county or municipality that has more aggressive regulation of homeless encampments, such camps may remain in place for a matter of months, not days or weeks.

On a closing note, issues regarding property values and homeless encampments, homeless encampments can persist even after camps are removed or otherwise eliminated. First of all, a comprehensive cleanup and sanitization process needs to occur to attempt to restore the property to a sanitary and safe condition.

Secondly, even after comprehensive cleaning and sanitization has occurred, the fact that a homeless encampment existed in a neighborhood may hang like something of a fog over the residences in the area. This can continue to impact property values into the future for what also can be a matter of a number of months.

Overview of Childhood Disability Benefits
October 15, 2020
Disability Considerations and Homeless Advocacy: Comprehensive Overview of the Two Social Security Disability Programs
September 28, 2020
Protecting Your Family and Neighbors: Safe and Effective Homeless Feces Cleanup
September 24, 2020
Advocates For Housing the Homeless: The Past, the Present and What Can Be Done to Help
September 23, 2020
Homeless Encampments on Private Property: Squatter’s Rights Versus Landowner’s Rights in California
September 15, 2020
Contact Us