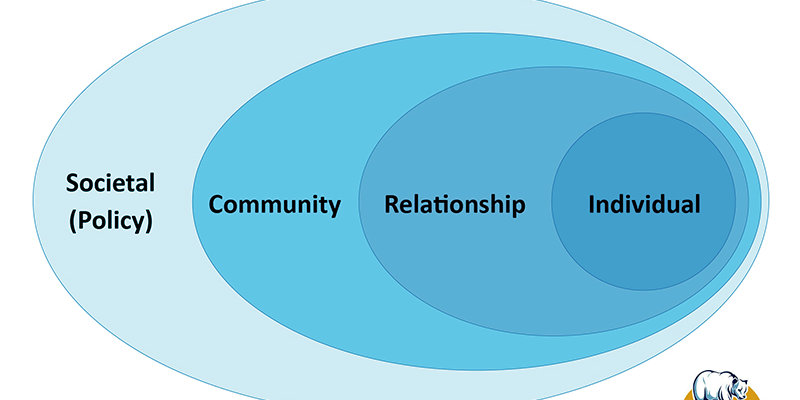 The death of a person by suicide has a direct impact on individual survivors of that loss. Depending on the life circumstances, these individuals can include:

Each individual that had a connection of some nature to the individual who died by suicide has his or her own unique response to that death. Depending on the nature of the connection these individual survivors of suicide had with the deceased person, a particular individual will face a grieving journey that fairly can be said to have varying degrees of complexity and unique challenges.

The suicide ecological model recognizes the unique needs of each individual with a connection to a person who has died by suicide. The response to a particular individual survivor of suicide must recognize the uniqueness of such a person’s needs, challenges, and grief journey.

In considering the suicide ecological model, a particular focus is on individuals that are part of the deceased person’s family and peer cohort. In the family cohort, these include:

The members of the peer cohort depend on the deceased individual’s standing in life. By that it is meant where a person who died by suicide was in the course of his or her own life journey. The peer cohort might include:

When it comes to postvention, it is these categories of survivors of suicide that typically require the most directed support and assistance. The logic behind this tends to be obvious. Family and peers oftentimes are the groups of individuals that are most directly impacted by a person who dies by suicide.

While it is true that family and peers represent the cohorts of individuals most likely to face the most significant emotional, psychological, and spiritual impacts of being survivors of suicide loss, there are others in positions less directly connected to a person who dies by suicide who can also be profoundly impacted by that type of death. These individuals are collected in broader cohorts commonly referred to as community, village, and tribe.

The stark reality is that a death by suicide can have a significant and detrimental impact on people in the broader community, for example. This type of death can impact people in a common tribe profoundly, even when there is a lack of a direct connection to the deceased person.

For example, take a high school student’s broader tribe of students beyond the particular school in which the deceased student was in attendance. When a high school student dies by suicide at one school, the impact of that death can impact the lives of at least some of the students at other high schools, middles schools, and even elementary schools as well. The broader tribe of students can be significantly impacted by this type of death.

As a consequence, postvention efforts must take into account the broader community and the more expansive tribe. There can be true survivors of a suicide of a person with more indirect connections to the deceased student who will experience challenges arising from the suicide loss.

Finally, members of the even broader society-at-large can be impacted by the death by suicide of someone they have no real connection with at all. Celebrity deaths by suicides provide prime examples of how this type of death impacts society more generally.

In recent years, the deaths by suicide of Robin Williams, Kate Spade, and Anthony Bourdain each had what accurately can be called a significant impact on a considerable number of people in society-at-large. The deaths by suicide of these famous figures caused significant emotional and mental anguish and upheaval for an undetermined number of people beyond the individuals most directly connected to these people.

Understanding the potentially broad reach of the impact of the death of a person by suicide to disparate members of society more generally necessitates postvention practices that recognize this reality. Professionals must be attuned to the reality that people in the society-at-large may even experience traumatic grief as the result of a physically distant death of a person by suicide with which these individuals had no direct connection during that deceased person’s life.