The Life Cycle of a Mouse 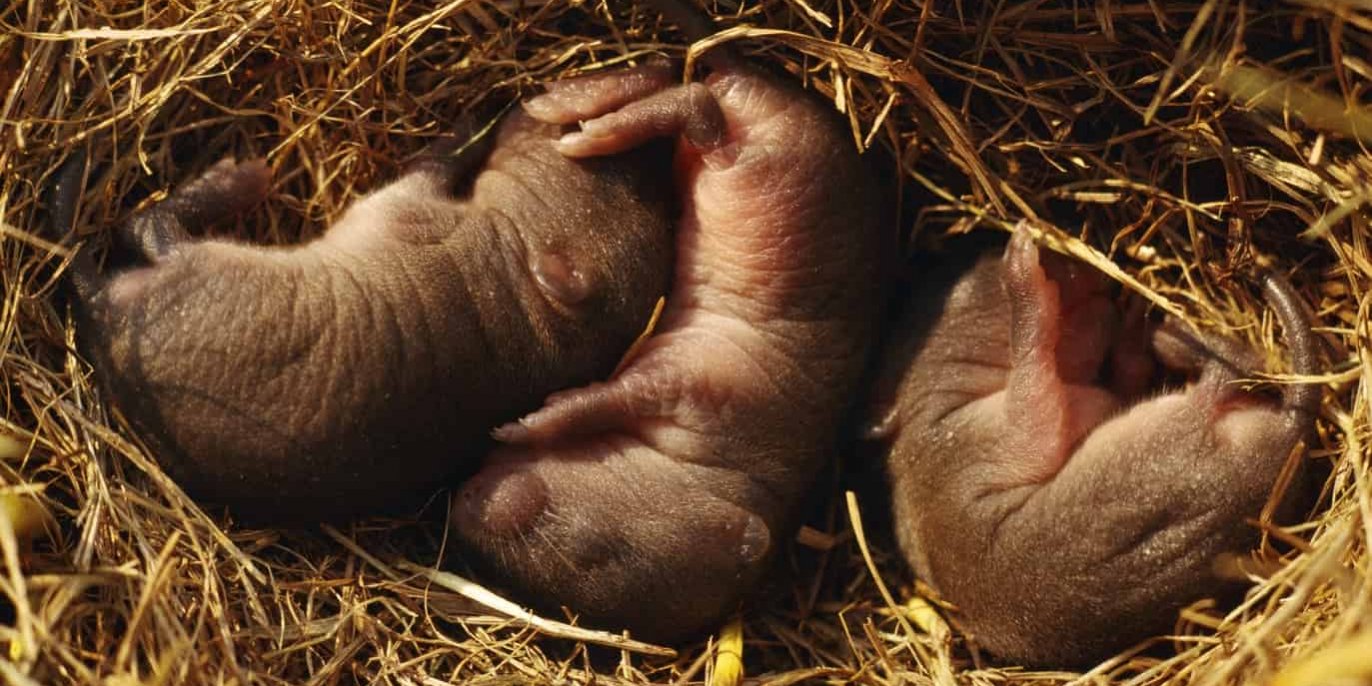 A female will be in heat for between four to five days. The gestation period for a mouse is about three weeks.

A typical litter of mice is between five to eight offspring. Infant mice are called pups.

A female mouse is capable of producing about ten litters a year. This means a female mouse in the wild can give birth to an average of sixty pups annually.

Birth and Infancy of Mice

A baby mouse or pup is born blind and completely hairless. After about fourteen days, pups begin to develop a thin coat of fur. They also are likely to begin opening their eyes at this juncture as well.

Adult female mice build some type of nest in which to give birth and raise their pups. They typically strive to build a birth and nursing nest at some distance from other mice. There are a few species of mice in which the male provides at least some assistance in raising pups. (This typically includes bringing food to the mother and sometimes staying in the nest to protect and keep pups warm.) The males in the vast majority of mice species have absolutely nothing to do with raising offspring and have moved on to innumerable mating partners after impregnating a female.

When it comes to nesting to give birth and nurse, a pregnant mouse will select a location in a residence like within the walls or in the attic. An expecting mother will have a nest completed for the express purpose of birth and nursing about a week before the pups are due.

A mother mouse will not hoard food as a matter of routine in advance of giving birth as is the case with some mammals. Rather, she will continue to forage up until she begins to go into labor. She will continue to forage continually while she is nursing her young. As mentioned elsewhere in this guide on the life cycle of mice, there are a few species of this rodent in which the male does provide assistance in raising young. This includes foraging and bringing food to the nest for a nursing mother. As is noted elsewhere, this is the exception and not the rule with mice generally.

A mouse does have a period in life that appropriately can be called its adolescence. This is a relatively brief period of time that commences about two to three weeks after a mouse is born and last until the animal becomes sexually mature.  On average, the adolescence phase of a mouse’s life lasts several weeks.

Mice adolescence begins not long after a mouse’s eyes finally open. This normally occurs at about the time when a mouse reached the age of about two weeks. More than anything else, the ability to see motivates a young mouse to become far more active and inclined to explore, under the supervision of an observant and protective mother.

During the adolescence phase, a mouse starts to eat solid food and begins to ween from nursing. A mouse’s body grows rapidly during this phase, getting very close to the size the animal reaches as an adult.

Adulthood and the Lifespan of Mice

Adulthood is said to occur in the lifespan of mice when they reach sexual maturity when they are capable of reproducing. For male mice, this occurs between five to ten weeks. Female mice reach adulthood at a later time, from eight to twelve weeks.

A mouse living completely in a wild setting has an expected lifespan of between twelve to eighteen months. A mouse in the wild has a number of natural predators that include:

There are two primary reasons why an adult mouse migrates into a residence, business, or some other building:

By taking up residence in a building of some sort, a mouse on average is able to extend its lifespan. Despite humans (eventually) realizing mice are present in a house, business, or other structure, the overall risk faced by mice inside a home or other structure oftentimes actually proves to be less than what the animal faces when nesting and scavenging out of doors.